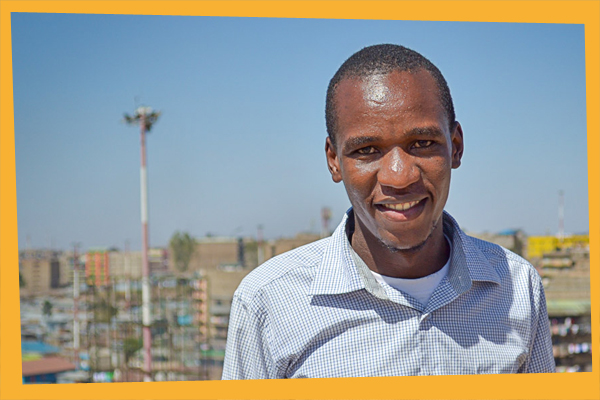 “Activism is a calling.”

There is a lot of hardship growing up in Mathare, like in any other informal settlement. Reaching 30 years for a young man and not being dead is an achievement. Reaching the age of 25 for a young woman and not being pregnant or forced into early marriage is an achievement. We end up losing most of our people in Mathare. We survive with one or less parents.
Within the settlement there is poor housing, poor healthcare, poor education and poor parental guidance and there is also the influence of illegal brew and drug use. Hardship opens your eyes and your brain for you to make sure that now you can think because there’s a lot of economic hardship, police brutality and social brutality.
I became a women’s rights defender because when there is a misunderstanding in the family, the biggest casualties are women. For a long time they have never had people side with them. In Kenya, women are perceived as number two in the hierarchy of the family. The phrase ‘ladies first’ never applies in Mathare because social arrangements mean that they are supposed to be servants to men.
Women’s issues are marginalised and their rights are violated. I have been very supportive of the issue of women as a trainer and in solidarity. You cannot separate the struggles in the informal settlements so I have been very active in defending women’s rights defenders by giving them support and access to networks.
Being a woman in Mathare is difficult because there are types of insecurity where women are most at risk. It is unsafe to walk in many areas of Mathare at certain times of the day because of the high crime rate and high likelihood of rape. We did a demonstration in 2012 on the harassment of women and in return the state opened live fire and one of our sisters was shot in the back. All my colleagues and I were arrested and we were only two men. It really pushed me. Things like kidnappings, illegal arrests, criminalisation, trumped-up charges and threats happen on a daily basis. My family has to accept that this is the truth but my activism has caused my entire family to panic, so I have explained to them why we need a much more just society.
This community has never understood that activism is a calling. People in Mathare see that NGOs bring money to the village so they think activism comes with a budget. The community perception of human rights is that all these ‘wazungu’ (foreigners) are coming from all over the world to the slums. They don’t understand that activism is because of a passion, of a feeling. It is a challenge to say ‘I do this because I believe in it’ and that activism has a voluntary aspect.
I wanted to become a toolkit organiser because of the history of women’s oppression in Mathare and in other informal settlements. I find it rewarding to see that the number of women organisers in Mathare is growing. Women can take the lead. The state feels that they are inferior, but when women are in front we will be successful. My passion is to get more women, recruit them and put them in front.