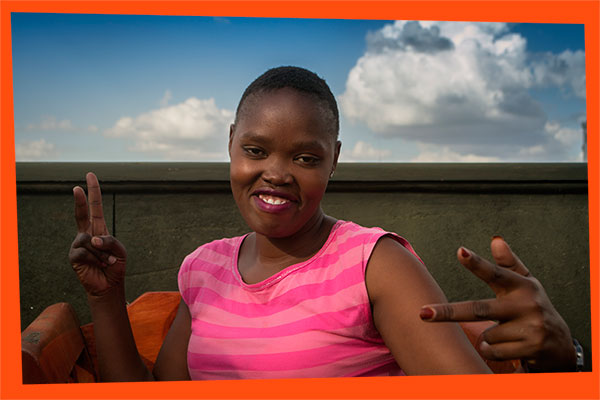 “Women are taking up leadership”

I grew up in Mabatini ward in Mathare, an informal settlement in Nairobi. At home I experienced domestic violence; my dad beat my mum all the time. In this ward, women are not always recognised by men. Women could not even stand for a small position in the community because men believed that women should stay in the kitchen, not stand for a position in our community.

Three years ago, I did not know how people defend other people’s rights. But through different organisations, I learned how to, for example, follow-up on a domestic violence case. In our community, this is a difficult task. Back then, the administration, which is supposed to protect its people, did not want women to report that they had been beaten by their men in their homes. Domestic violence was normalised; like it is something which should happen. This is the reason why I became a human rights defender.

Things have changed through different organisations that have come to Mathare. These organisations offer capacity building sessions where women are taught their rights and to fight for what they believe in. We can now see women taking positions of leadership, even in Chief’s Camp; a woman can now become a chief,[1] compared to before when this position could only be held by men. Things have really changed; women are taking up leadership.

What I am currently working on is supporting women taking up leadership positions because we are heading into the elections period. We campaign for them. We support them. We stand for them. As a result, women’s issues will hopefully be represented in the County Assembly and in the Parliament.

My work as a human rights defender[2] has really had an impact on my family. I have been teaching my father how to solve disputes at home with the information I received during capacity building sessions. This process began five years ago and now my father is different; he does not beat my mum anymore and even if they quarrel they sit down and have a dialogue.

What I find most rewarding about being a human rights defender is seeing my community change. That’s my reward. Seeing women standing up for their rights and standing for positions of leadership, teaching men how to live peacefully in the houses. Through my work as a human rights defender, I hope that more women can become empowered; I want my community, and all women, to learn how to stand up for themselves.

[1] This is a leadership position within the National Government Administration and Field Services.

[2] Lilian is a member of the Pan-African Grassroots Women Liberation Movement.